Beginning with Windows 10 Insider 14342 you can enable the new Containers feature in Windows. This allows you to run Windows Containers directly in Windows 10 as Hyper-V containers. At the moment only NanoServer containers are supported. So it's time to get used to NanoServer and how to create some base images. 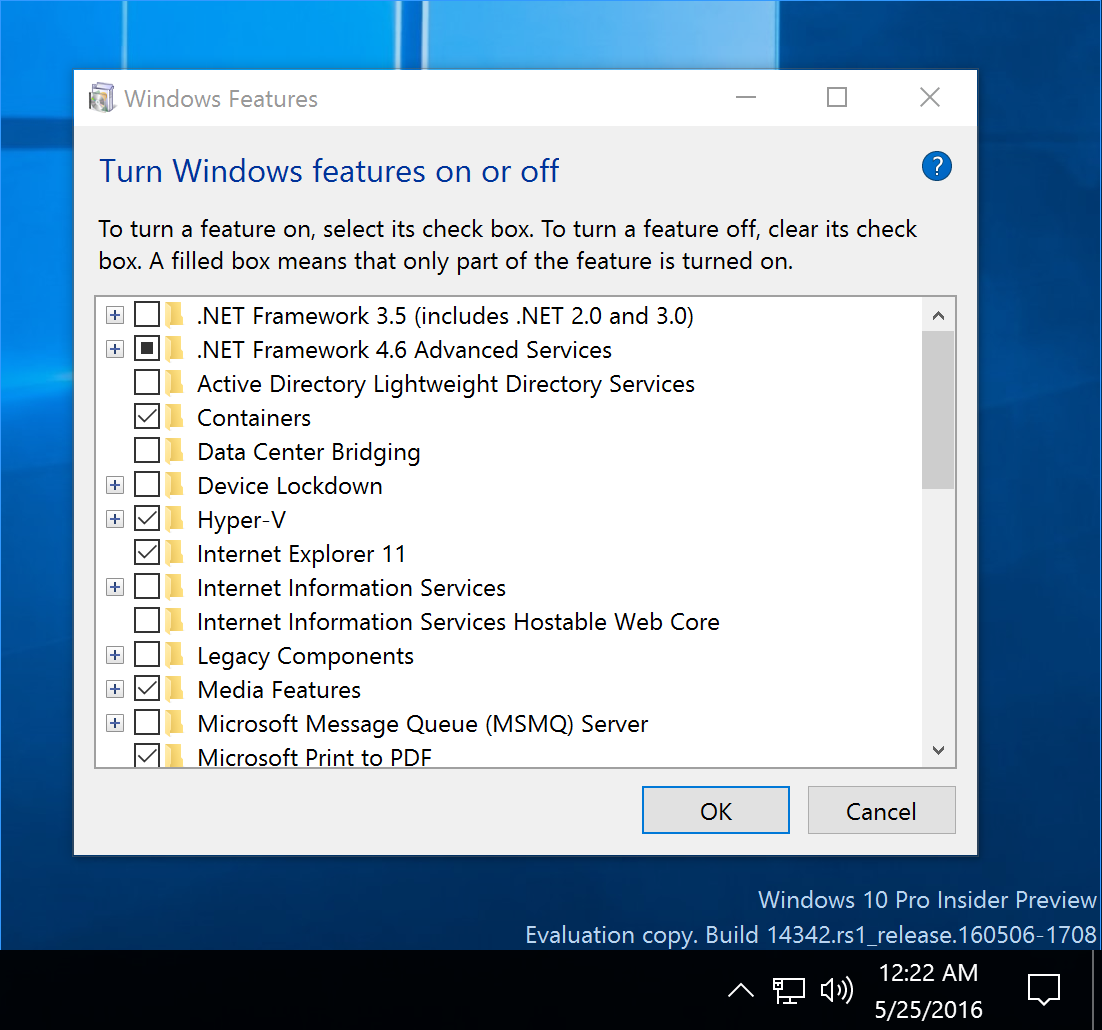 In this blog post I'll show how to build small base images to deploy Node.js applications as NanoServer Docker images that you can run in Windows 10 or in Windows Server 2016 TP5.

What is Nano Server?

Each Docker image must use of of the two OS images: windowsservercore or nanoserver.

A Windows Server Core image is highly compatible with previous Windows Server Core installations. You don't have a GUI, but you can install almost everything into it. But this compatibility comes with a prize, the size of the OS image is about 9.3 GByte as it contains about a whole server.

A Nano Server image is highly optimized and almost everything was taken out of it to be able to deploy more of these containers in cloud servers. The size is about 817 MByte. This makes installing Docker on Windows 10 much faster than with the windowsservercore OS image.

So if you get asked which to choose you probably would answer to take the smaller one.

But as soon as you try to write a Dockerfile to install some software into a Docker image you will notice that the minimized OS comes with a new challenge. You can't install MSI packages in Nano Server.

If you look at nodejs.org there are only MSI packages for Windows if you also want to have npm installed.

So how could we build a Node.js Docker image based on Nano Server? I've tried different ways, eg. also installing tools like lessmsi while building the Nano Server image only to find out that lessmsi is only a 32 bit application. Another restriction in Nano Server: You only can run 64 bit processes in Nano Server.

Another approach would be installing Node.js on your host machine and copying the files into the Docker image. But I don't want to install more tools than needed on a Docker host.

Therefore I show you a way to use only Docker commands and a Windows Server 2016 TP5 machine to build both Windows Server Core image as well as a Nano Server image with Node.js + npm installed.

A much easier way is to start with a Windows Server Core image. You can download and install the Node.js MSI package with this Dockerfile. This is very similar to the Linux version and downloads, verifies the download, installs the package and then removes the download again.

Now open an editor with

and enter this Dockerfile:

You can build the Node.js Docker image with this command

After that you have Node.js + npm installed in this Docker image.

Now we want to distill the Node.js folder from the Docker image. To do that we have to run a Docker container and then we can copy the folder to a temporary folder on the host machine.

With this extracted folder we build the Nano Server image. The following Dockerfile copies the contents of that temporary folder into the Windows directory which is already in PATH. You may want to put the files in another directory, but then you also have to add it to the PATH environment.

Create a sub folder for the Nano Dockerfile

and create this Dockerfile:

Run this command to build the Nano Server image

Now we have two Docker images, one for Windows Server Core and one for Nano Server.

Here is a small diagram of the three steps we just did:

I've uploaded both Docker images to the Docker Hub and found out that the Windows Server Core image is about 55 MByte and the Nano Server image is only 9 MByte.

Extracting all the layers of the first Docker image I found out that installing an MSI package also saves a copy of the package in the MSI cache. And running commands also leaves some changes in local databases and the registry which is also stored as difference in the layer.

So one advice to build small Windows Docker images is to avoid installing MSI packages and prefer ZIP files or even using a COPY deployment into an image. Of course MSI packages are often more convenient to install but result in bigger image sizes.

Another easy way to dockerize your Node.js application is the ONBUILD feature in the Dockerfile. At least for simple examples it is very convenient to use a prepared Docker images with that feature.

So let's build another Dockerfile just like the official node:onbuild image which does these steps to install your application and all the dependencies:

So we create another folder for that Dockerfile

Now build the Nano Server image with the ONBUILD feature:

I have tested this with a small Node.js web server that uses Express and some other dependencies.

To build a dockerized Node.js application running in a Nano Server container you only have to go to your Node.js source code and add a single line Dockerfile

and build your application Docker image with

Investigating the layers of such an application showed some other temporary folders which aren't needed inside the Docker image.

So we can optimize that ONBUILD Dockerfile a little bit to remove these temp folders while building your application Docker image. There is a command npm cache clean, but this didn't work for me, so I have changed that to some rd commands. This is the final ONBUILD Dockerfile:

With that optimized Docker image deploying a simple Express web server the final application Docker image went down from 24 MByte to 15 MByte. In comparison with the unoptimized Windows Server Core image the same application is 82 MByte on the Docker Hub.

If you don't want to build these Node.js Docker images manually you can find them on the Docker Hub with links to the Dockerfiles in the GitHub repo.

With such a Node.js Nano Server base image on the Docker Hub you can start developing on your Windows 10 machine. Now dockerize your Node.js apps into Nano Server containers and share them with others via the Docker Hub.

The Windows Server 2016 is only needed to install MSI packages and distill the software into Nano Server images.

Back in June I have attended the DockerCon in Seattle. Beside lots of new features in Docker 1.12…

It is great to see that more and more people are starting to test Windows Docker containers. The latest…