At DockerCon 2016 in Seattle Docker announced the public beta of Docker for Windows. With this you can work with Docker running Linux containers in a very easy way on Windows 10 Pro with Hyper-V installed. In the meantime there is a stable version and a beta channel to retrieve newer versions.

And Microsoft has added the Containers feature in the Windows 10 Anniversary Update. With some installation steps you are able to run Windows Hyper-V Containers on your Windows 10 machine.

But there is a little bit of confusion which sort of containers can be started with each of the two installations. And you can't run both Docker Engines side-by-side without some adjustments.

This is because each of the installations use the same default named pipe //./pipe/docker_engine causing one of the engines to fail to start.

Beta 26 to rule them all

As you can see in the video you don't have to change environment variables or use the -H option of the Docker client to talk to the other Docker engine.

So if you download Docker for Windows beta or switch to the beta channel in your installation you can try this out yourself.

The installer will activate the Containers feature if you haven't done that yet. A reboot is required for this to add this feature.

From now on you can easily switch with the menu item in the tray icon.

There also is a command line tool to switch the engine. In a PowerShell windows you can type

and it switches from Linux to Windows or vice versa. Take care and type the option as shown here as the option is case sensitive.

Proxy for the rescue

But how does the switching work without the need to use another named pipe or socket from the Docker client?

The answer is that there is running a Proxy process com.docker.proxy.exe which listens on the default named pipe //./pipe/docker_engine.

If you switch from Linux to Windows the Windows Docker engine dockerd.exe will be started for you which is listening on another named pipe //./pipe/docker_engine_windows and a new started Proxy process redirects to this.

I have installed the Sysinternals Process Monitor tool to learn what happens while switching from Linux to Windows containers. With the Process Tree function you can see a timeline with green bars when each process has started or exited.

The following screenshot shows the processes before and after the switch. I have switched about in the middle of the green bar. 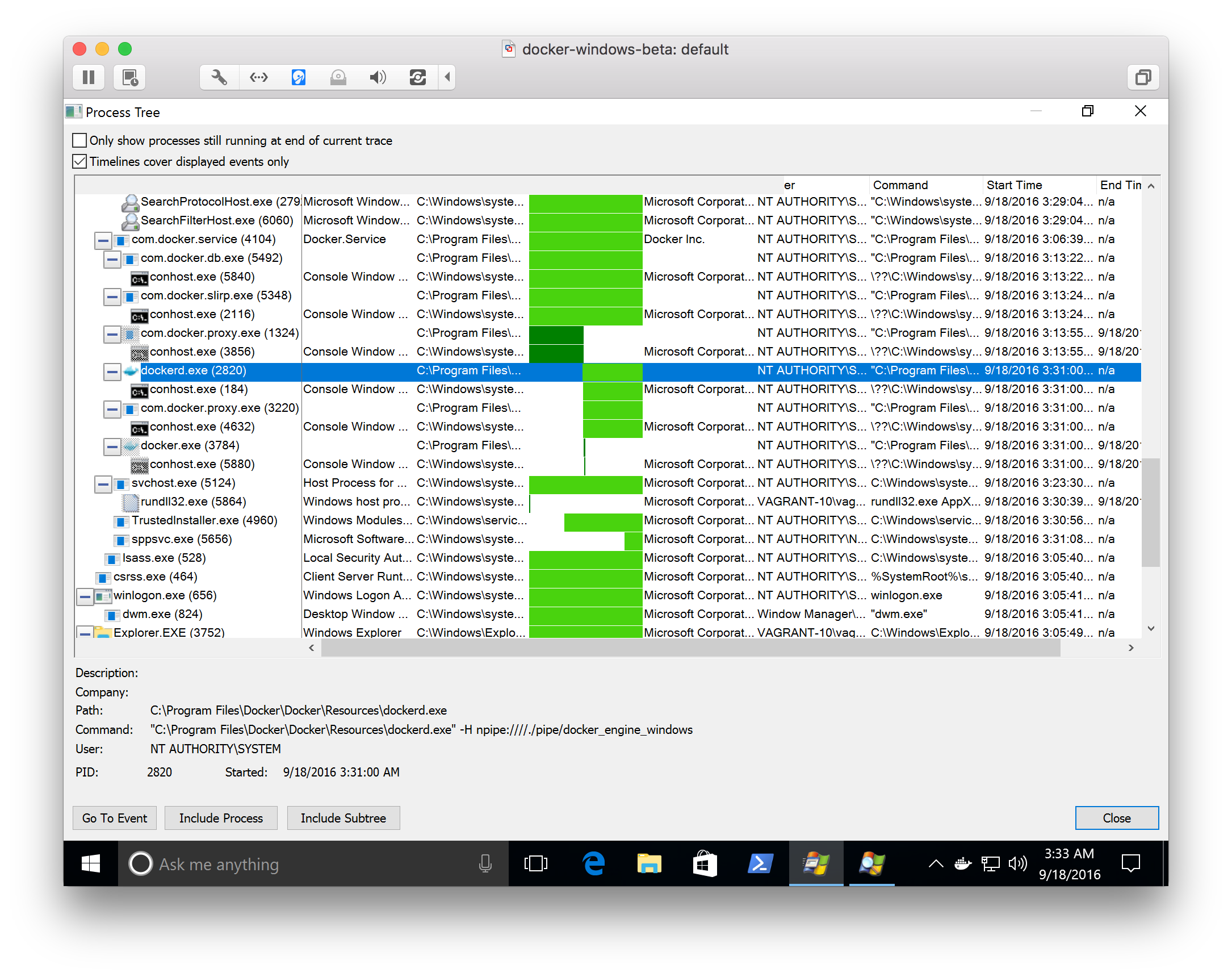 The current com.docker.proxy.exe (above dockerd.exe in the list) that talked to the MobyLinuxVM exits as the dark green bar highlights that.

So just after the switch you still can use the docker.exe Client or your Docker integration in your favorite editor or IDE without any environment changes.

Running both container worlds in parallel

The proxy process just switches the connection to the Docker engine. After such a switch both the Linux and Windows Docker engine are running.

To try this out we first switch back to the Linux containers. Now we run the default nginx web server on port 80

then switch to the Windows containers with

Now let's run some Windows containers. But first we try if the Linux container is still running and reachable with

But to demo how simple nanoserver containers could be I'll keep the following sample as it is. So we create our own small Node.js web server. First we write the simple web server app

Enter this code as the mini web server in the file app.js and save the file.

Now we build a Windows Docker image with that application. We open another editor to create the Dockerfile with this command

Enter this as the Dockerfile. As you can see only the FROM line is different from a typical Linux Dockerfile. This one uses a Windows base image from the Docker Hub.

Run the Windows web server as a Docker container with

Then open the browser with the container's IP address:

Additionally the port forwarding from the host to the container allows you to contact the web server on port 81 from another machine.

And yes, the Windows container is also handling requests.

The new Docker for Windows beta combines the two container worlds and simplifies building Docker images for both Linux and Windows, making a Windows 10 machine a good development platform for both.

And with a little awareness when to switch to the right Docker engine, both Linux and Windows containers can run side-by-side.

How to protect a Windows 2016 Docker engine with TLS

Today I have started a Windows Server 2016 VM with Container support in Azure. This is pretty easy as…

Back in June I have attended the DockerCon in Seattle. Beside lots of new features in Docker 1.12…