What a wonderful day. I just changed some code in one of my weekend projects and then it happened. I totally screwed it up, I accidentally pushed some secrets to a GitHub pull request. Yes, ship happens. We're all humans and make mistakes. We normally blog about success, but I use my mistake to talk about how to fix this and how to prevent it from happening in the future again.

Well, I edited some code of my flash script to flash Raspberry Pi SD cards. This tool can also inject configuration to boot your Pi without any manual interaction to a specified hostname, or add your WiFi settings so it can join your wireless network automatically.

I pushed some code to a work-in-progress pull request when I saw my mistake on GitHub: 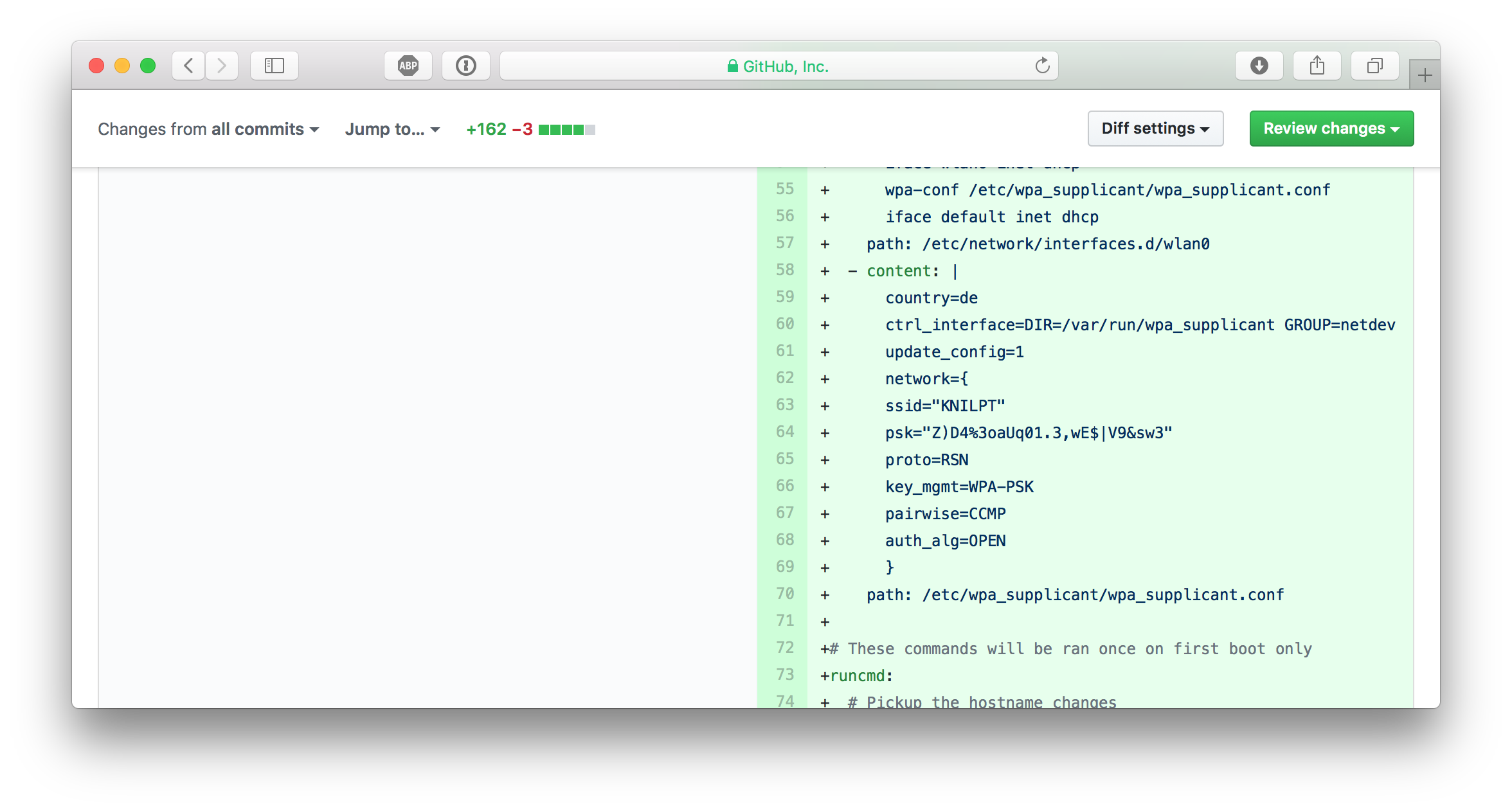 Well, for convenience reasons I kept a configuration file in the repo to easily flash a new SD card image with WiFi settings. And I can't really remember, but I eventually typed git add . and git push some minutes ago without recognising that this was a really, really bad idea.

I immediatelly went to my Ubiquity Cloud controller and changed the Wireless Network Security Key. 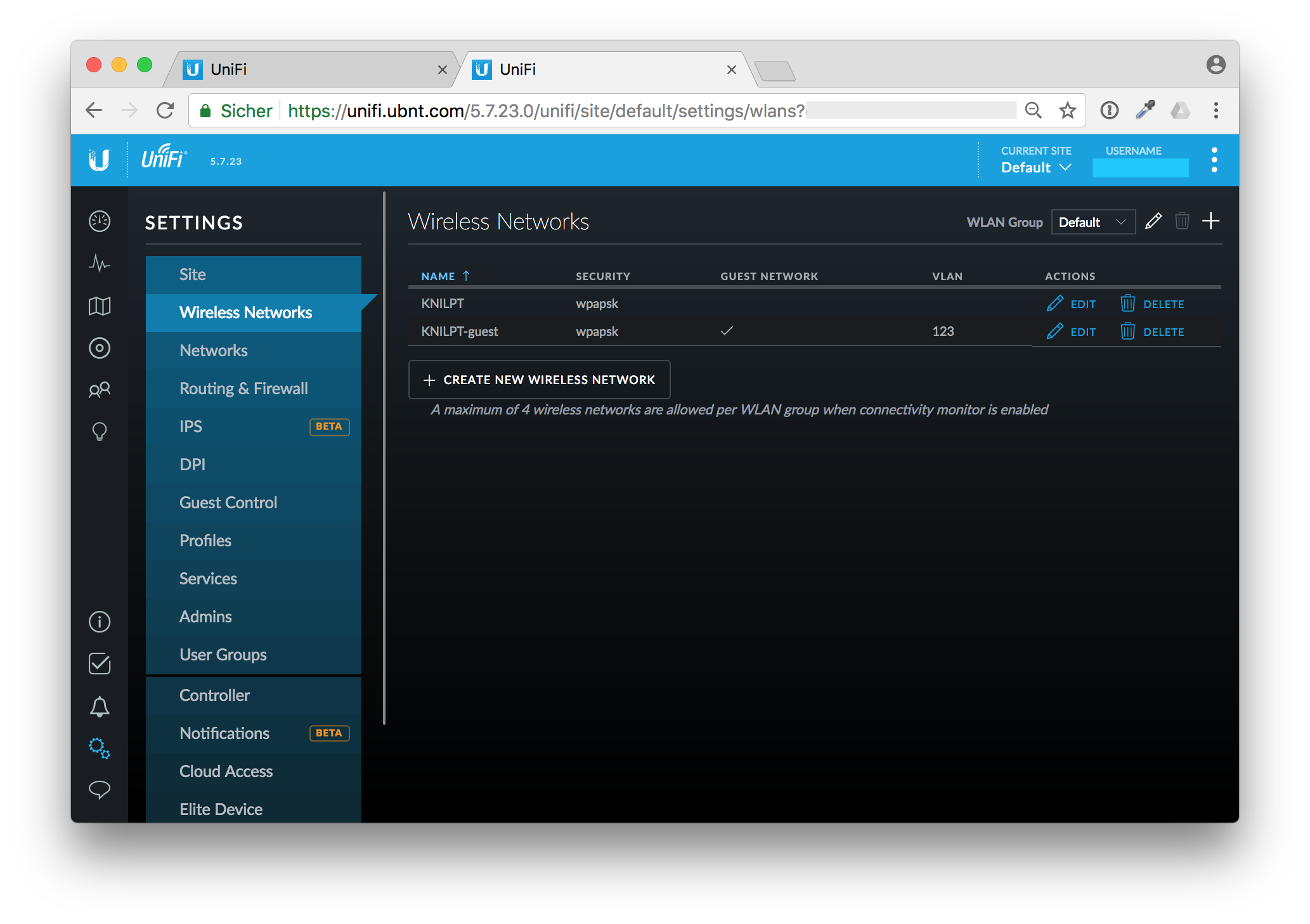 But that was the next mistake. OK, I've changed the security key. But after a moment I realized that I also have some unattended boxes lying around in my house that use the old key to connect to my WiFi. My AirPort Express boxes for example are connected wirelessly.

Calm down, think, and organize

OK, changing the Security Key as first step is probably not the best idea. I don't want to run to each box with a patch cable to reconfigure it. Instead I've changed the key back to the old, compromised one and reconfigured all my wireless devices that I can reach through WiFi. 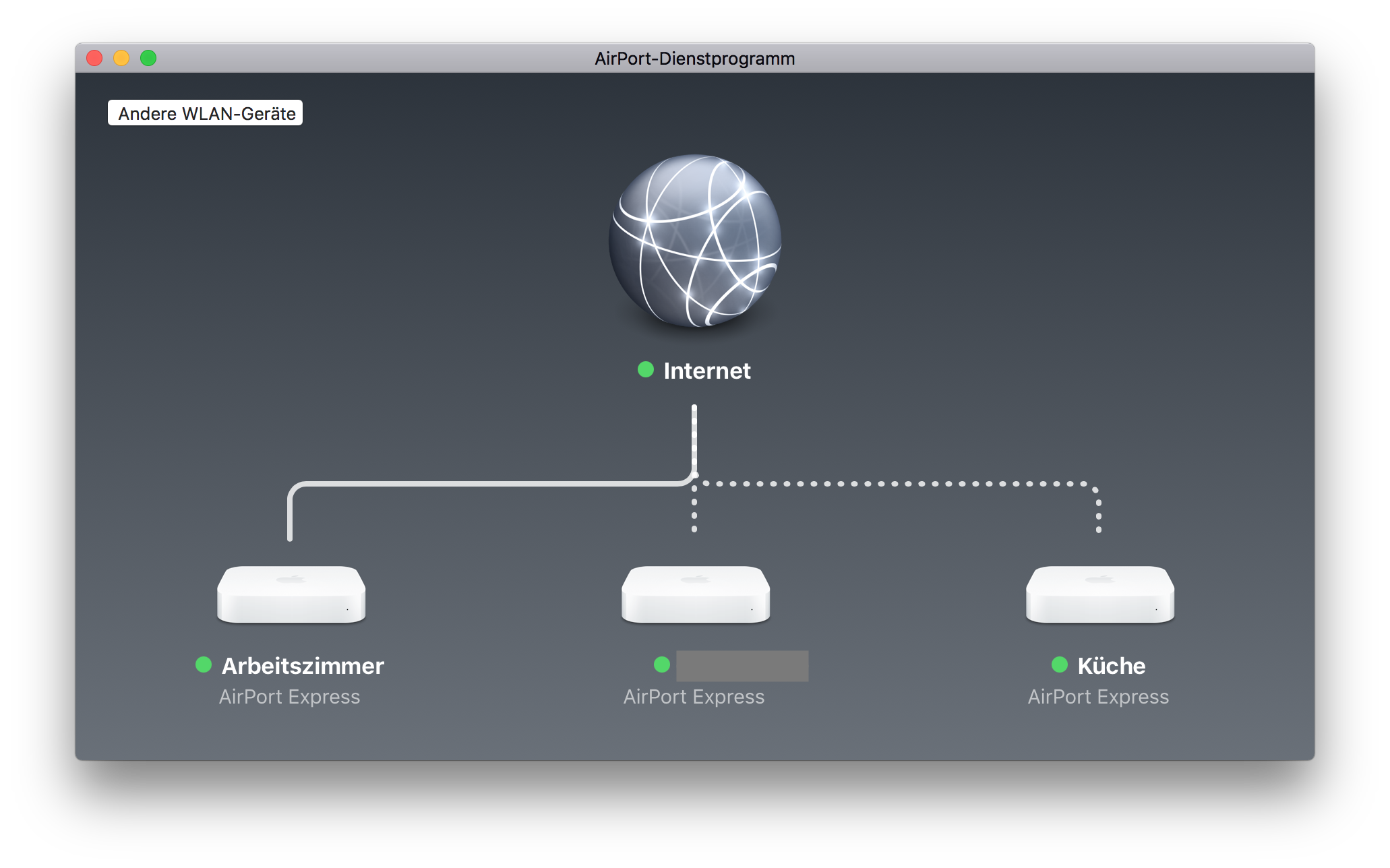 The devices with the dotted lines are connected through WiFi. Edit the wireless network password with the AirPort app on your Mac. 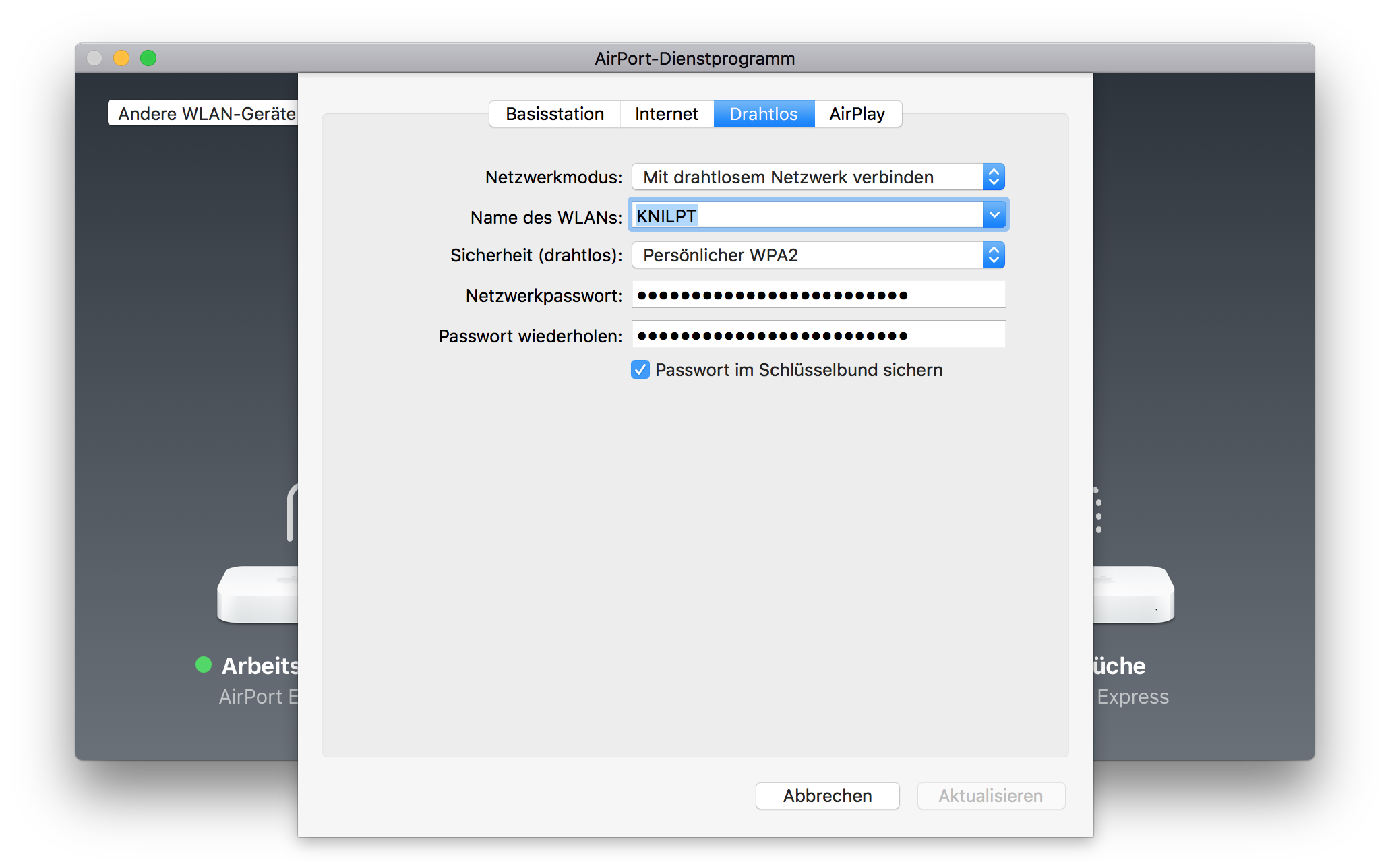 After that change they will drop out of WiFi as they now have the new, but not actually working password. 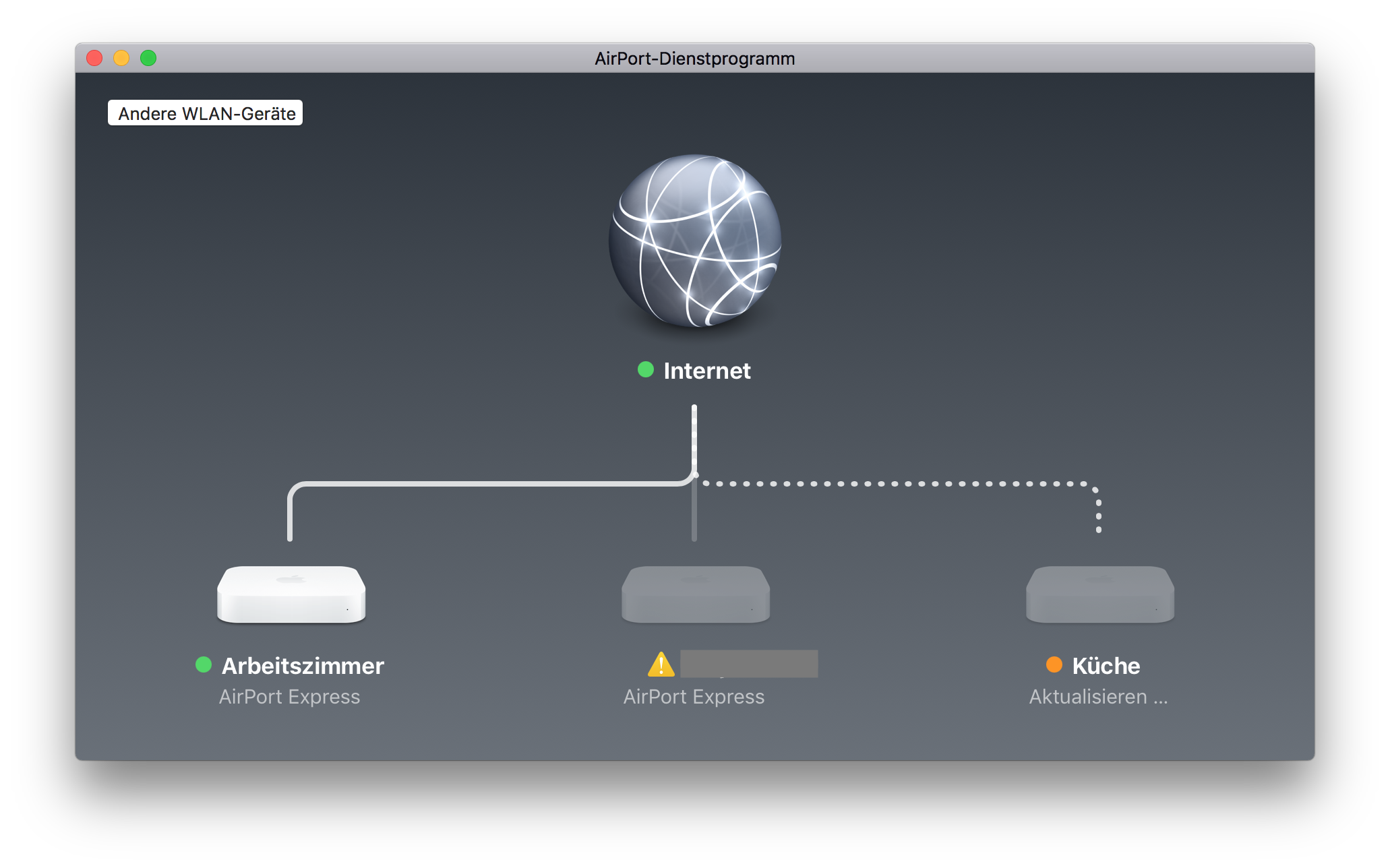 Repeat that for all devices and think of other wireless devices that you can update without climbing up ladders or other hidden places.

After that I changed the wireless security key in the Unify cloud controller. Save the new WiFi key in your password manager, I use 1Password 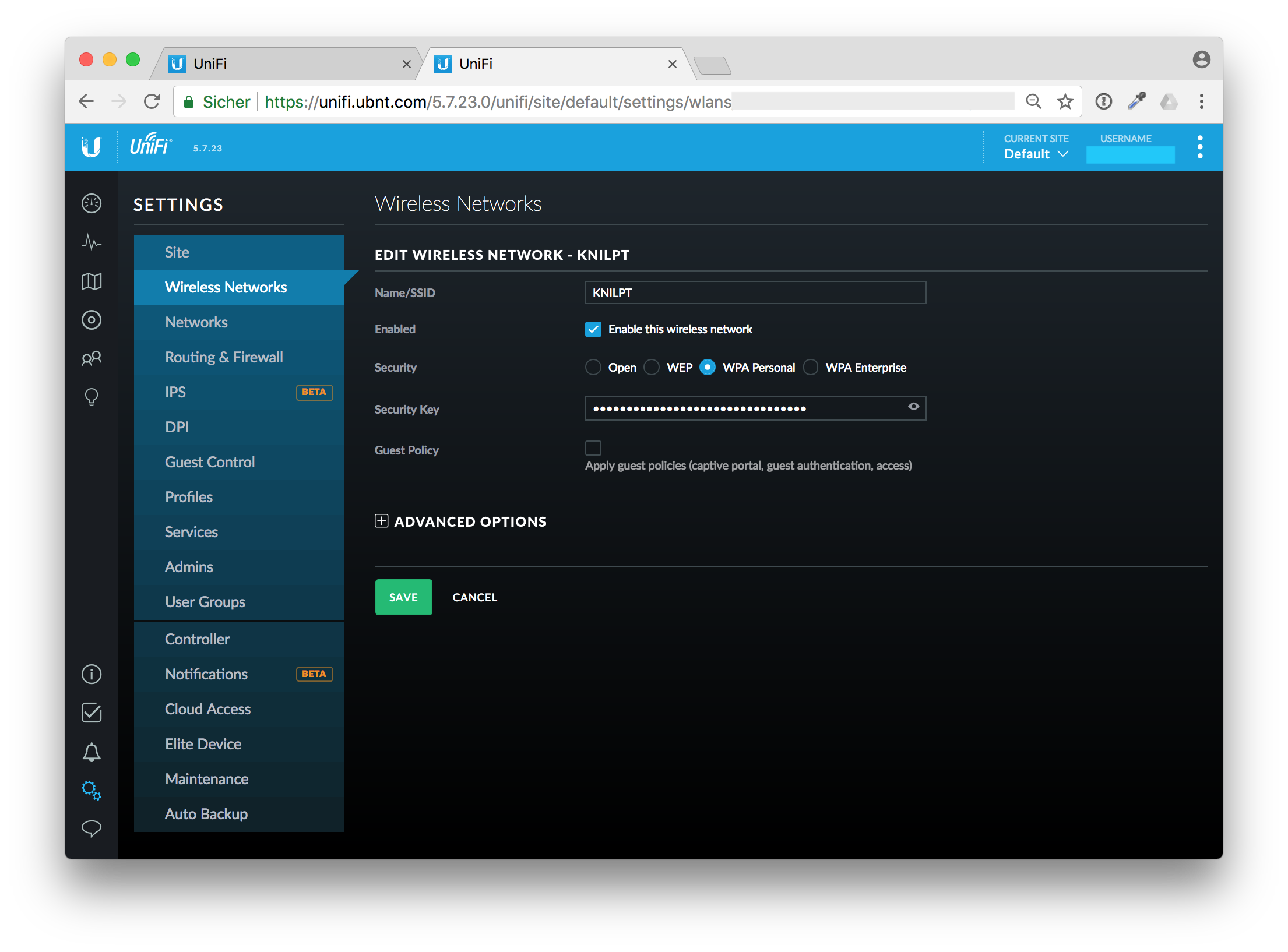 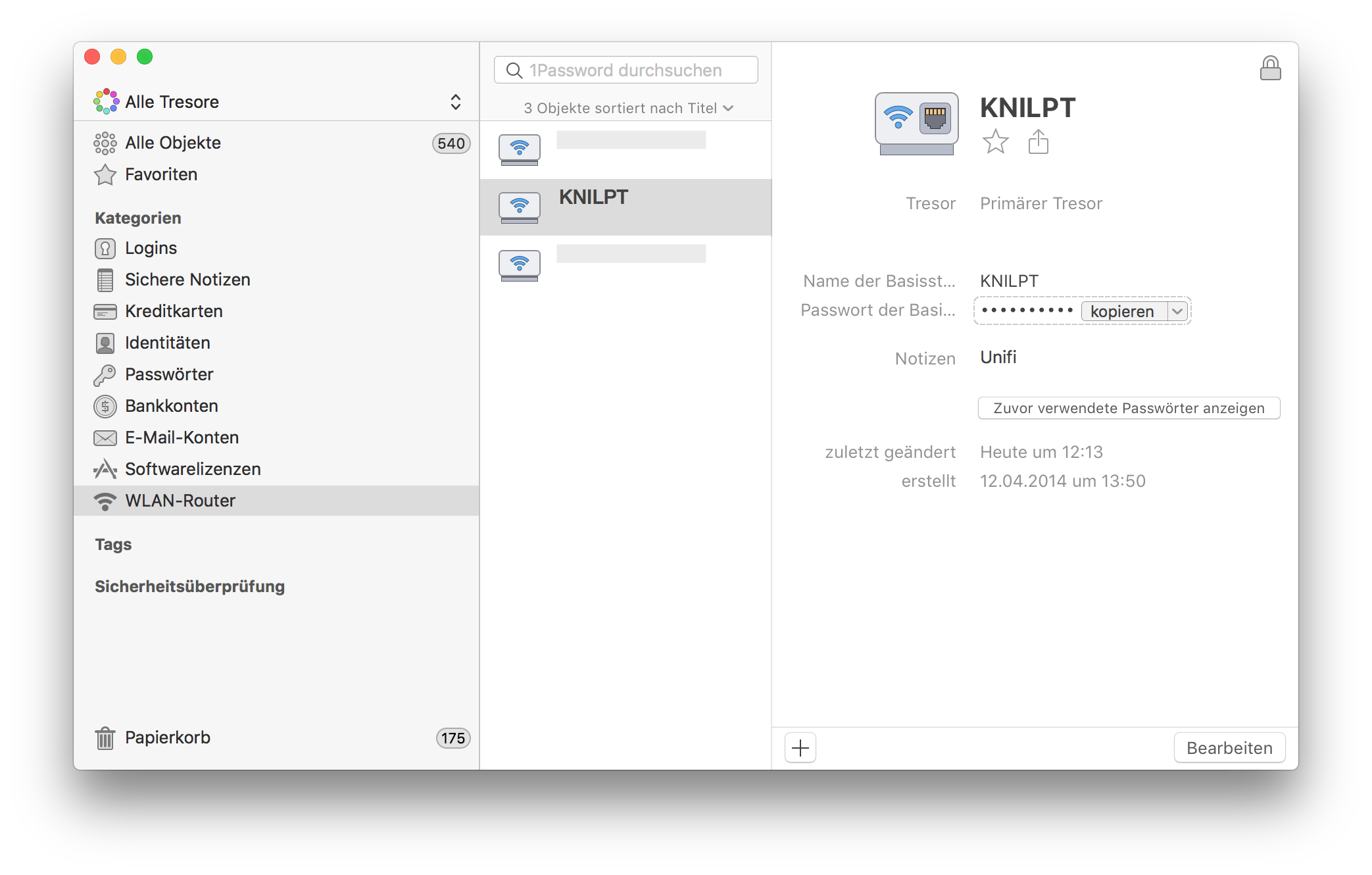 After reconnecting to the new and now secure WiFi with the updated key I thought of the next steps. OK, the whole family has to update their smartphones and tables to connect to the WiFi again. That is managable. Now I'm coming to the next phase.

The next steps was to clean up the pull request to get rid of the accidentally added files. You might think when you are quick nobody has seen your change and you can skip changing your WiFi secret at all. I'll prove you wrong in the next few minutes.

First I commented on my mistake to laugh at it, that's just relieving. 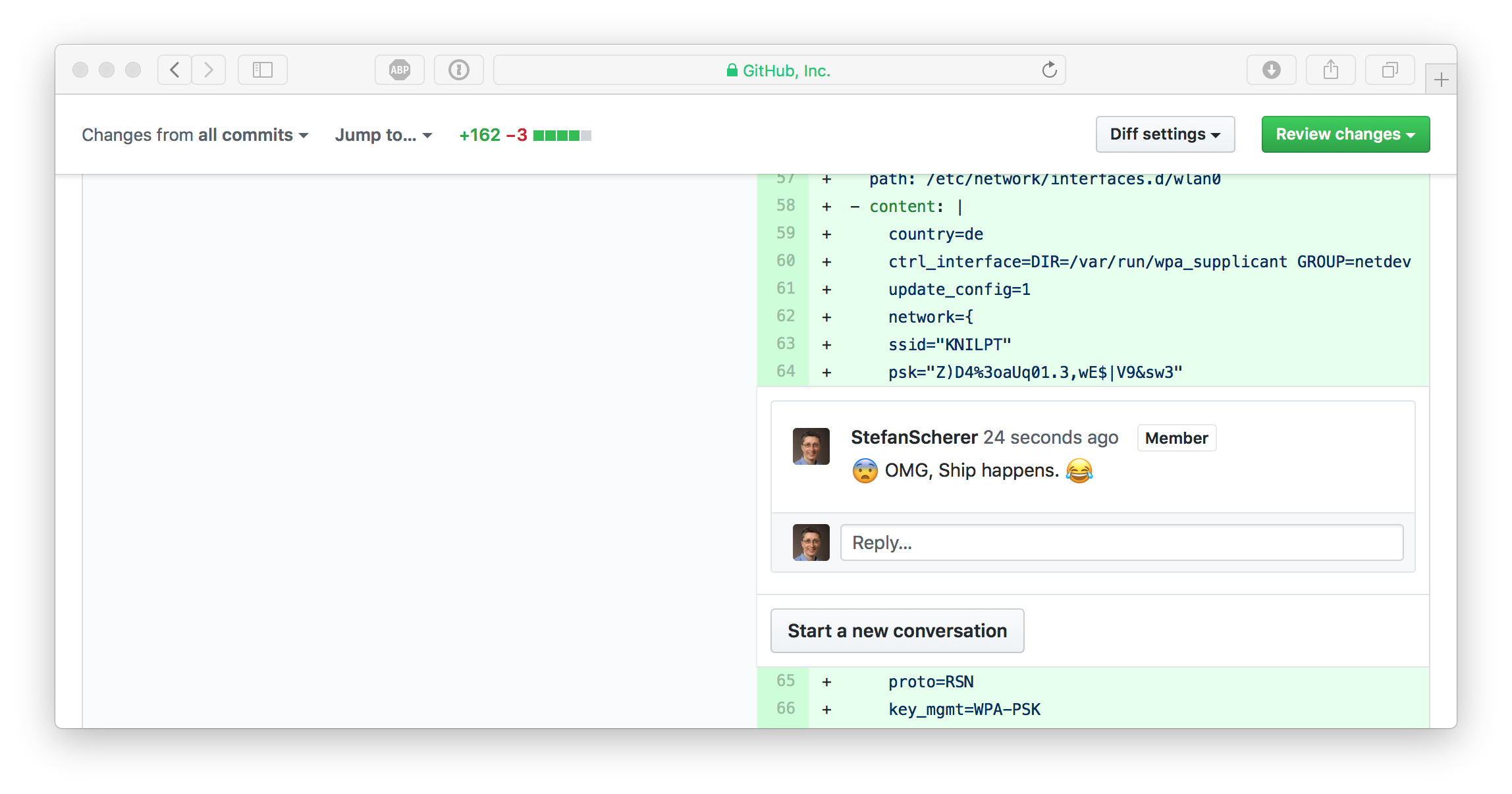 Now it's time to clean up the pull request branch and remove the unwanted files. We could just do git rm wifi.yml, but this will be added as a new commit to Git. Git has a history of each commit. I also want to get rid of these old commits.

These were my steps to cleanup the pull request branch.

I first squashed the pull request to one commit.

Then in the editor just pick the first commit and change all other commits to squash. 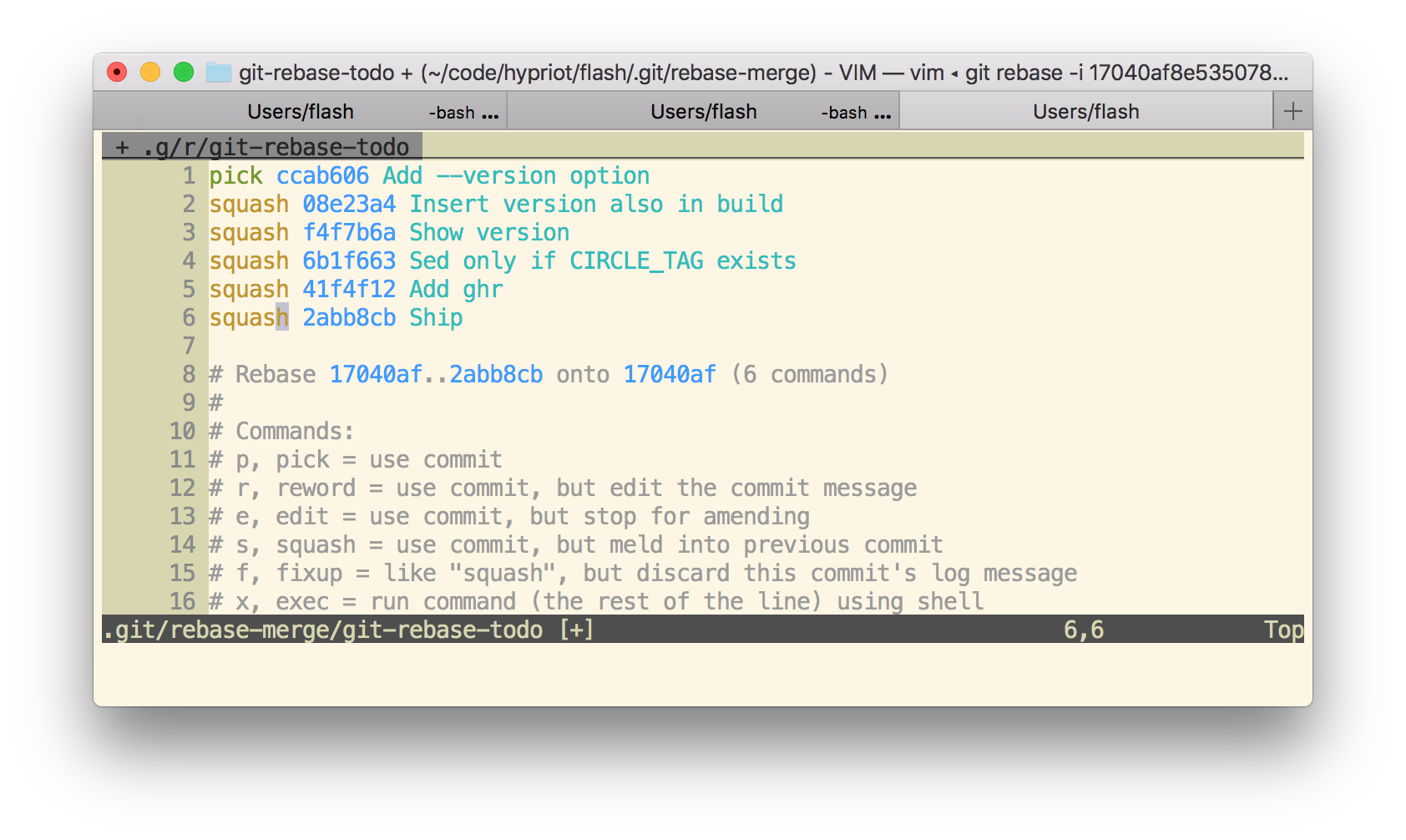 Now I have only one commit. This commit can be easily undone with

Then add your secret files to the .gitignore file and add everything and commit it again.

Now your local pull request branch has only the files wanted in one single commit. But GitHub still stores the secret files. With the next command we'll fix that.

When things went bad sometimes a git push -f is needed. But beware: This will overwrite the history in your Git repo. You really have to know what are you doing here. Don't use git push -f in a panic. Calm down first. Otherwise you will make it even worse.

But to remove the unwanted commits you need to overwrite the pull request branch. 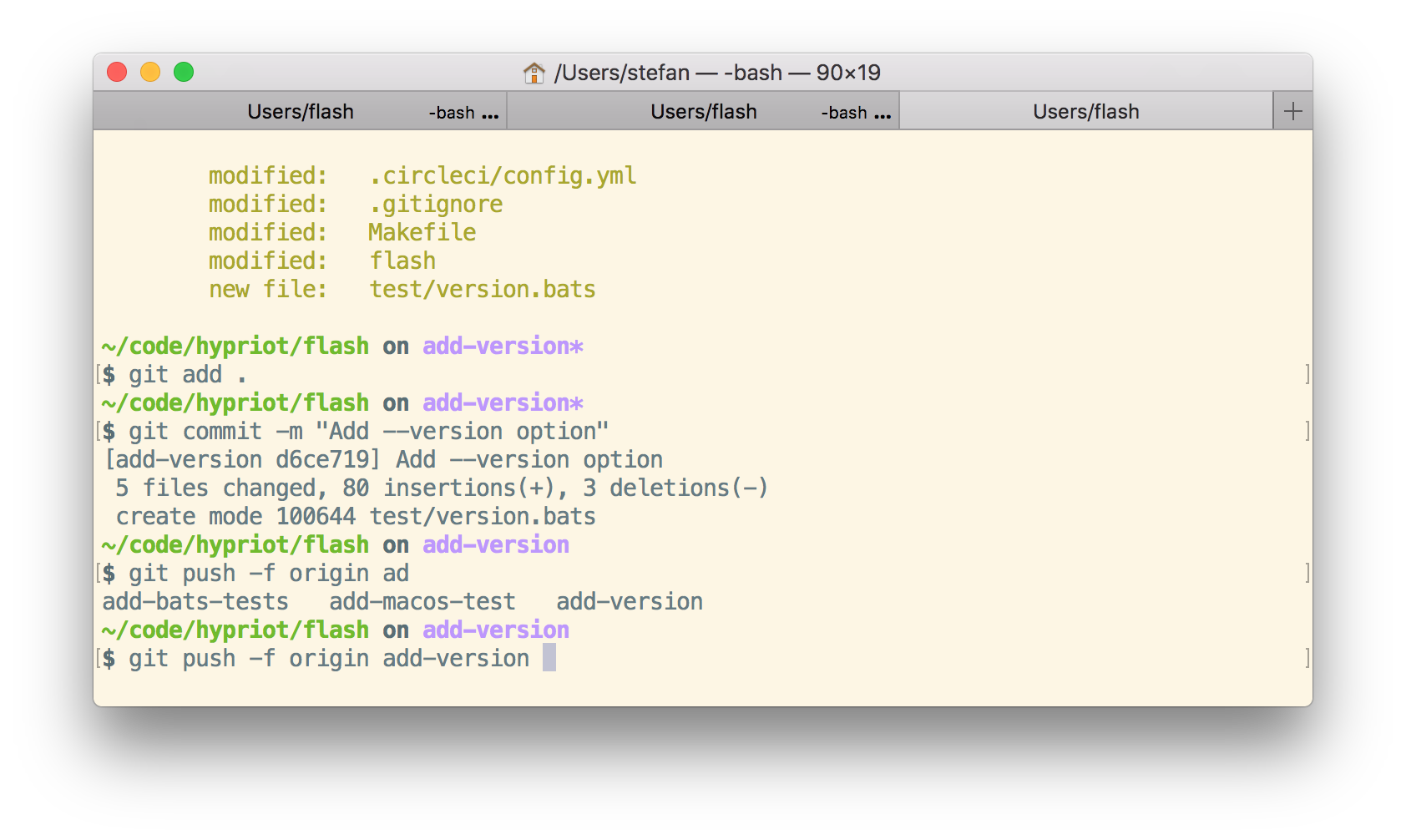 Everything concealed? No way

When you now look at the GitHub pull request you might think that every secret vanished and it's safe to keep the old WiFi password. No, GitHub has an incredible database, don't think that that this information was removed.

Each pull request can be commented and even after a git push -f some of the comments got outdated on source that no longer exist. But this is still visible and retrievable. 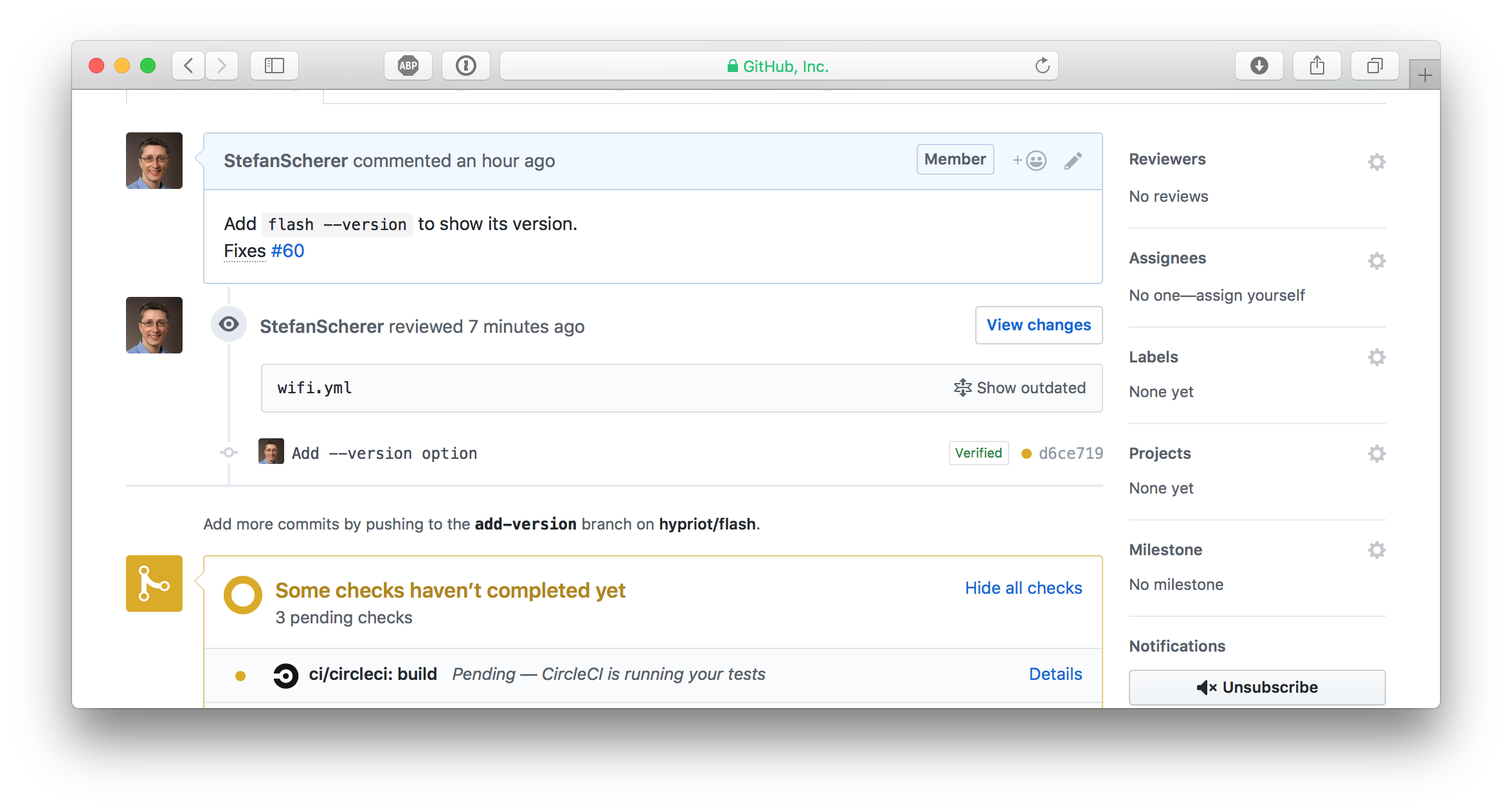 Look closer, there is a "Show outdated" link. You can open this 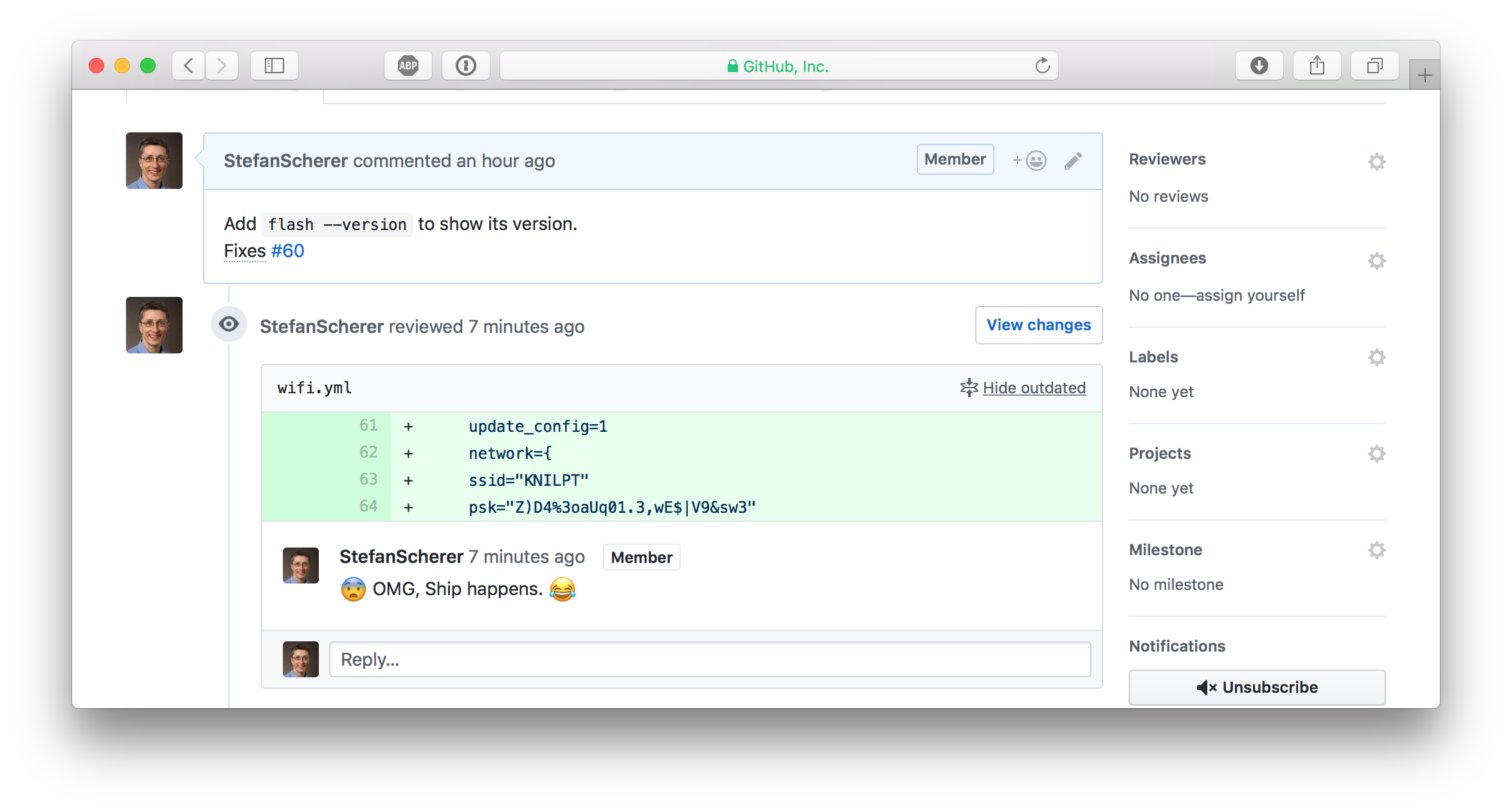 So whenever such a data breach happens, be prepared to change your secrets. If it hurts, do it more often.

After all this disaster recovery and cleanup there is still something to learn. What was the root cause and how can I prevent to make the same mistake again?

The git add . command adds all modified and also untracked files and git push pushes all this code to GitHub into your already open pull request branch.
Yes, I'm lazy and often commit everything as I'm normally work on one thing in a project.

I normally recognize such secret files from adding them, but as I realised the hard way is that you will type git add . at some point in a hurry without even recognizing it.

I scrolled up my terminal and found the situation where everything went wrong very soon. 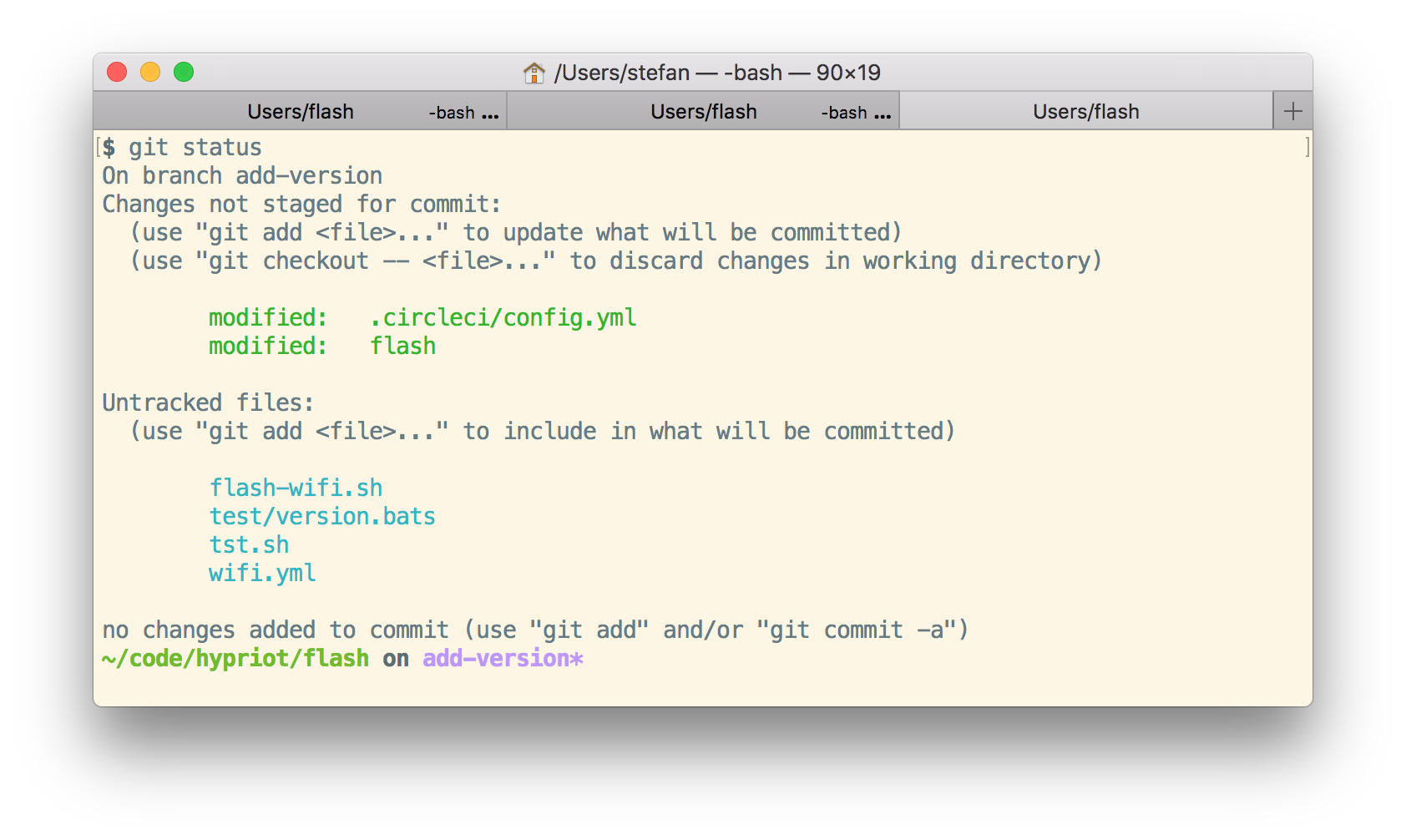 This is a bad smell having untracked files.

What can this be fixed?

I'll look closer into the last idea to inject secrets on the fly. Don't leave secrets unprotected on your harddrive. Use command line interfaces for your password managers.

You cannot change the past, you only can learn to make it better in the future.

I hope you find this blog post useful and I love to hear your feedback and experience about similar mistakes or better tips how to protect yourself from doing mistakes. Just drop a comment below or ping me on Twitter @stefscherer.

How to build a forked GitHub repo: Spot the YAML

Maybe you find an interesting project on GitHub and want to build it your own. How can you do…

How to find dependencies of containerized Windows apps

Running applications in Windows containers keeps your server clean. The container image must contain all the dependencies that the…