In my previous blog post I showed you how to get Windows Updates into your container images. But how do you know if your underlying Docker image you use in the FROM line of your Dockerfile also uses the correct version of the Windows base image?

Is there a way to look into container images without downloading them?

There are several services like imagelayers.io, microbadger, shields.io and others which provide badges and online views for existing Docker images at Docker Hub. Unfortunately not all support Windows images at the moment.

I found an inspector tool written in Python that might be useful for that task. I've enhanced it and created a tool called winspector which is available as Docker image stefanscherer/winspector for Windows and Linux. With this tool you can inspect any Windows Docker images on the Docker Hub.

Run it from Windows

If you have Docker running with Windows containers, use this command to run the tool with any given image name and an optional tag.

At the moment the Docker image depends on the windowsservercore base image. I'll try to move it to nanoserver to reduce download size for Windows 10 users.

Run it from Mac / Linux

If you have a Linux Docker engine running, just use the exact same command as on Windows. The Docker image stefanscherer/winspector is a multiarch Docker image and Docker will pull the correct OS specific image for you automatically. 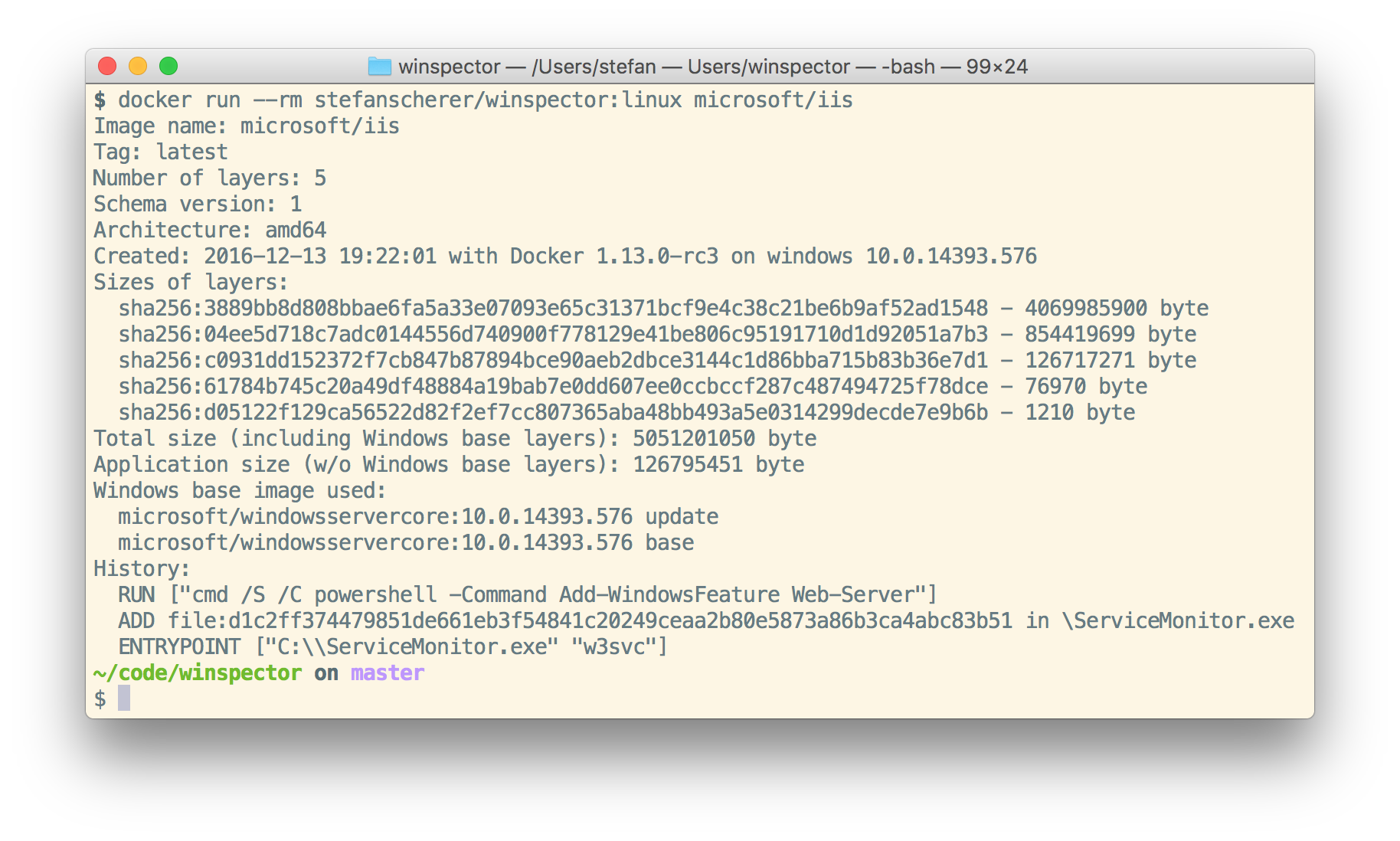 Now let's try winspector and inspect a random Docker image. We could start with the Windows base image itself.

Even for this image it can show you some details:

As you can see the latest windowsservercore image has two layers. The sizes shown here are the download sizes of the compressed layers. The smaller one is the layer that will be replaced by a newer update layer with the next release.

How big is the winspector image?

Now let's have a look at the winspector Windows image to see what winspector can retrieve for you.

So the winspector Windows image is about 27 MByte and it uses the latest nanoserver base image.

And winspector is not restricted to Windows images, you can inspect Linux images as well.

then winspector will show you

As you can see the Linux image is about 32 MByte.

So once you have downloaded the latest Windows base images like windowsservercore or nanoserver the download experience is the same for both platforms.

With winspector you can check any Windows container image on the Docker Hub which version of Windows it uses.

You can also see how big each image layer is and learn how to optimize commands in your Dockerfile to create smaller Windows images.

The tool is open source on GitHub at github.com/StefanScherer/winspector. It is community driven, so feel free to send me feedback in form of issues or pull requests.